There was a poetry contest on Stephen Colbert I found on facebook and I couldn’t resist the challenge. Winners will be notified in June?… What!! Doh! Yes, I wordled Stephen Colbert and apparently I’m not the only one. Humm…

I pasted facebook dot com slash The Colbert Report
On January 22nd into wordle dot net,
Try it yourself you might get similar results I bet.
And the old English calligraphy “JSL Blackletter” hurt my eyes.
So I proceeded to gorge on “Grilled Cheese BTN” font.
The gold letters in “Shooting Star” hue
Fittingly chilled with his eagle’s red and the blue.
The biggest word “Colbert”
Could not be mistaken in fat Republican red
Even though Stephen’s fictional personality
Is an Independent he says.
Yet the next largest word “Stephen”
Was in Democrat blue.
“Report” followed in size in the gold
which may have something to do with the
Emmys and Comedy Central tchotchkes sold.
Then “oo.cc dot com” used to shorten Colbert’s links
Was the next word in republican bold.
“Super” indeed and competing in size
with the level of importance as:
“Romney” and
“SOPA” in red.
Be careful in posting
What scarlet letter “Mitt”’s private corporations said.
I could go on with wordle blue letter “Ads”
And keeping a million out of work
To keep one man out of a job with red “GOP”
While Jon Stewart’s Grilled Cheese gold letter “PAC”
On twitter viciously attacks Stephen”, sportingly of course.
“Little” in Republican red leads the conversations
followed by “websites”.
I could go on how Colbert Wordled his way
into our social media hearts.
He’s a master at satire, story, linguistics
And current events.
He is Scripting for Success
If my name isn’t RAW.
I’m just getting started.
With his hair and personality just right
He’s nailed the look with his distinguished part. 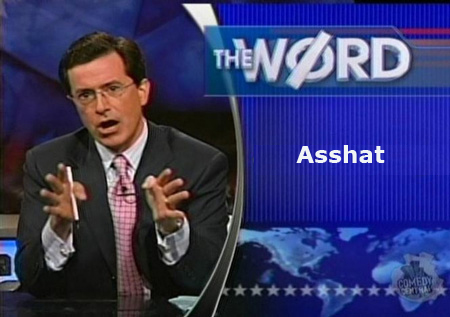