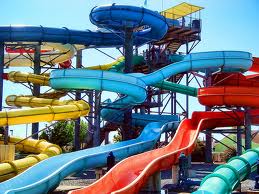 DORNEY PARK – Yes we had  fun weekend of spending time with Jason’s co-worker at Craft Tech (Jay’s another programmer not one of the rocket scientists) and his family of two high energy girls 9 and 11, the mom and mom’s friend who all had season passes. To my dismay we went on only one water slide before the water park closed at 7pm (Water slides and ropes course at camp are my childhood epitome of summer) and then enough roller coasters till 10pm to fill my quota for a year and then some! I’m looking forward to my chiropractic adjustment on Wednesday, giving Dr Paul something different to work on… the corkscrew adjustment!

REALITY TV SHOW SHOOT – On Saturday I did my Destiny 5 reality show where I enjoyed getting to know more of my teammates the “Bitching Badgers” (yes that’s what we named ourselves after coming up with that name right away and then just to be sure eliminated 15 other suggestions which sounded like tampon commercials i.e “the flowing females”. The other team age 36+ are called “4 Harmony”.

POWERFUL EMOTIONAL EXERCISES – “Destiny 5” director/producer Mike had us say one sentence about our life in our teams that focused on a single emotion until we switched to an higher one in 3 minutes. We took turns going up the emotional scale from shame -> guilt -> apathy -> grief -> fear -> desire -> anger -> pride -> courage ->trust -> acceptance/ forgiveness -> willingness -> clarity/knowingness/ reason -> love -> joy -> peace enlightenment. For example RUTH: I’m proud of the Live Your Peace interview series and having such an awesome husband. 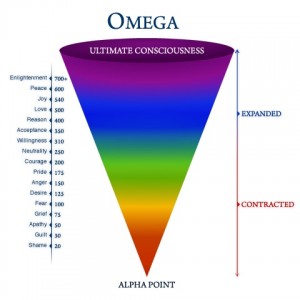 GIVING A VOICE TO THE NEGATIVE & POSITIVE VOICES – For closing remarks Mike interviewed us about our quest and actions we were taking this week while two of our teammates took turns being the negative and positive voice in our ear talking simultaneously while I was trying to hold an intelligent conversation with Mike. (We were told this was an exercise that came out of working with schizophrenics.) It’s not easy. I was the first to go in front of the camera for my interview with Mike and as I was talking about learning new webinar software and getting that up and running on my Philly Fringe event along with a cool product I’m about to unveil my negative voice whispered something right off the bat into my right ear that rattled my concentration and I turned to her and said, “Shut Up!” It was hard. Then I was able to focus on the loving voice in my left ear as the interview progressed. It’s amazing how most of my weekend was reaching for better sounding voices as the crippling self self doubting one were taking a back seat for a big part of the weekend! Yah!

FOCUS ON YOUR GOALS AND IGNORE THE NEGATIVE VOICES – My other team mates had similar challenges like, blurting out in the middle of their action plan, laughing “No I’m not an alcoholic!” and continued with her plans to revise a scene of her play this week. Then we watched Mike take one of my teammates up the emotional scale with her husband leaving her this month with boxing gloves. Every time Mike would say an emotion going up the scale and could tell where she was stuck or weak based on the strength of her punch. Mike accidentally skipped the emotion courage which she really needed and she got stuck on -> acceptance. Powerful stuff. I asked Mike for the video of that boxing exercise to help market his program.

WRITING ABOUT AND LIVING AN OPULENT LIFESTYLE – Then we went to a birthday party at one of Jason’s website clients and enjoyed yummy catered food under big lush trees, by the pool. Before it drizzled a little we enjoyed the amazing flower gardens and a horse farm with 100 + guests and a huge bonfire to top it off. Lisa Beth Weber played her always inviting tunes. The house was gorgeous too!

RE-FILLING UP THE SPIRITUAL WELL – We had a powerful speaker on Sunday at Circle; Dr. Louis A. Tenaglia on the topic: The Perfection of Living An Imperfect Life. I envisioned Dr. Louis sitting at the Philly library speaking to all the people that battle with self acceptance and embracing your divinity however he left service before connecting. Good news the PR Goddess did what I wanted to do, capture some of his compelling message in her Bliss Blog. Thanks Edie Weinstein! After going to lunch with friends  I left Jason to fend for himself with our high energy lunch buddies and then ride his bike back home in the rain as I went to Mt Airey for a three hour workshop. It’s called “Your Relationship with Money and How to Improve it” Part 1/3 with Melody-Rose Parker (who is competting on the other “Destiny 5” team to also raise 100K in 60 days).

TRANSFORM YOUR CONVERSATIONS AROUND MONEY – Melody of TranscendentJourney.com has been great helping me clear the junk around money and stepping into my authentic self without the need from spirit crushing valadation from others, you know the kind that stops you from starting your own business, taking that trip, speaking from your heart to a loved one or coworker or launching a new product. Melody-Rose shared a boat load of powerful emotional tools to move past our blocks and limiting money conversations. I’m eager for her to put together a training series for the Philly Fringe and help artists who have blocks around validation and being their authentic self. “One Peace at a Time” participants with receive some powerful training as you tune in each day for a godsend of powerful training and resources to Live Your Peace and Get Your Dreams out of the Drawer.

GREAT TIPS FOR WRITERS FROM JONATHAN MABERRY – After bumping into Wegmen’s grocery store Sunday night after a scrumptious stake and grilled veggie dinner I had the pleasure of talking to Jonathan about his best selling, award winning success as a writer. I was really happy to learn some very key things around writing jobs, his powerful work with teen story tellers and the great work they are producing, how writers groups make all the difference, his cool success scriptwriting, novel series and his accomplishments in Martial arts. Writers, be sure to take notes!

HAPPY BIRTHDAY YOUNGER BROTHER! – I’ll be calling Paul on his 30th this Saturday August 13th. I still remember the night he was born and some of the prenatal training my parents took me to leading up to the big day I got the brother I ordered. Seriously I was going to be an only child if I hadn’t locked my best friend Kevin in the house and told him he had to be my brother.  As the inquisitive six year old I sat in the back of the room with my journal and sketch pad and spoke up occasionally about the medical movies when I didn’t understand something. The new fathers to be told my parents how grateful they were that I was there to ask the questions that they were scared to ask! I’m glad I never had to learn about no return paul-icy because he’s awesome and I’m so proud of him following his passion as a transformational spiritual student and musician. Now he’s touring the the country with Girls Guns and Glory as their bass player.

ABOUT RUTH – Author, publisher, playwright, success trainer, world traveler, producer and “The Queen of Collaboration” Ruth Anne Wood, uses the power of story to help entrepreneurs connect, inspire and transform limiting stories into desired victories. Through Ruth’s production/ training company Scripting for Success, she birthed the Live Your Peace interview series and documentary in the works, inspired by the 2009 Nobel Peace Prize conversation. Now with plans to finish her movie for Sundance 2012 Ruth invites the 200,000 participants during the 2011 Philly Fringe/ Live Arts Festival to “Dance like nobody’s watching; love like you’ve never been hurt. Sing like nobody’s listening; live like it’s heaven on earth,” while connecting with your message of peace, passion and prosperity with friends and media globally!

AVAILABILITY: Pennsylvania, nationwide by arrangement and telephone or skype

Please share Philly Fringe Show “One Peace at a Time” one sheet with your community. http://liveyourpeace.com/phillyfringe-2011 event page