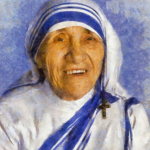 People are often unreasonable, illogical and self centered;

If you are kind, people may accuse you of selfish, ulterior motives;
Be kind anyway.

If you are successful, you will win some false friends and some true enemies;
Succeed anyway.

What you spend years building, someone could destroy overnight;
Build anyway.

If you find serenity and happiness, they may be jealous;
Be happy anyway.

The good you do today, people will often forget tomorrow;
Do good anyway.

[Reportedly inscribed on the wall of Mother Teresa’s children’s home in Calcutta, and attributed to her. However, an article in the New York Times has since reported (March 8, 2002) that the original version of this poem was written by Kent M. Keith.]

Here are Kent Keith’s comments on this version:

Of course, this is not the original version, nor the version that was on Mother Teresa’s wall, although it is sometimes attributed to her.

The last two lines in this “final analysis” version trouble me, because they can be read in a way that is inconsistent with the teachings of Jesus, the life of Mother Teresa, and the message of the Paradoxical Commandments themselves. The statement that “it was never between you and them anyway” seems to justify giving up on, or ignoring, or discounting other people.

That is what Jesus told us we should not do. Jesus said that there are two great commandments-to love God, and to love our neighbor as ourselves. So in the final analysis, it is between you and God, but it is also between you and “them.” And when it comes to them, Jesus made it clear that we have to love people and help people anyway. We can’t give up on them or ignore them or write them off. That is the point of the Paradoxical Commandments as well-we find meaning when we love and help people, no matter who they may be, or how difficult they may be. We find meaning by loving and helping them anyway.