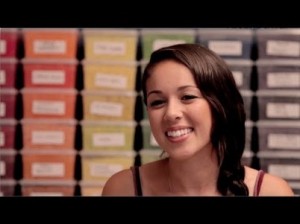 After close to 80 Live Your Peace interviews since November 2009 I started making up to 10 minutes of our conversation into videos to share on social media. The first one was featuring a new comic called All Fall Down written by my guest Casey Jones. Yesterday I was putting together a very simple video of  Rev Vincent Salvatore Michael Scioli with just his picture and mine and few words scrolled across. The imovie software kept crashing at least four times right when I was almost done. Doh! That’s why I am so inspired by the Making of “In Your Arms“, a music video by Kina Grannis which includes 2,460 frames of stop motion photography, 1,357 hours (over two years) and 288,000 jeally beans!

Thank Ellen for letting me know about such a blissful video! It’s giving me some ideas when I interview Edie Weinstein in a book she mentioned me and her friends in called The Bliss Mistress Guide to Transforming the Ordinary Into the Extraordinary. Check out the cool making of In Your Arms video now!

Live Your Peace is inspired by the making of In Your Arms.